TAROT’S EMPEROR IS MY NEMESIS. 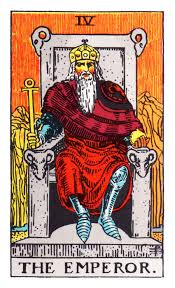 Committed to authority, structure, systems, and patriarchy, he’s the STOP sign, the NO ACCESS barricade, the guy manning every single freakin’ security checkpoint. Ask him for permission, and your request is likely to be stamped: DENIED.

The Emperor makes the rules and hires minions to enforce them. He’s the senator voting on the speed-limit bill, which the police uphold. He’s the president of your homeowners’ association, who, having established how short you need to keep your grass, has his secretary send you threatening letters if it’s grown over a half-inch. He’s the manager of the hair salon at the far end of the waterfront, where there are no public restrooms, who instructs the receptionist no to let you in to use theirs—no matter that you’re about to pee your pants.

All of which is fine. I mean, someone’s got to keep chaos at bay. But, dammit, when I’m faced with one of the Emperor’s implacable minions? When I need something just one toenail across their seemingly arbitrary line? For instance, when the stern librarian turns down my request for a measly three-day extension on THE SECRET LIFE OF OWLS? Then, I’m not a fan. Nope.

Perhaps, like me, your character just wants an extension on a library loan—or permission to paint a butterfly mural on her garage. Or maybe she’s facing something more serious. Temporarily strapped, she might be seeking food assistance to tide her over. Or coverage for critical medical treatment. Or political asylum! Whatever her need, the resounding “no” she receives from the Emperor or one of his representatives may seem like the final, defeating word.

Unless she’s prepared to take matters into her own hands, that is.

So, what do you think? Do some brainstorming, pen in hand, about:

Need help with your book? I’m available for book coaching and manuscript review! And check out “Should I Hire a Writing Coach” in THE WRITER magazine.

Thank you to U.S. Games Systems, Inc. for kind permission to use the image of The Emperor from the RIDER-WAITE (SMITH) TAROT.